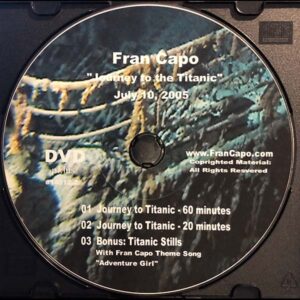 A 54 minute DVD hosted by Worlds Fastest Talking Female Fran Capo of her journey two and a half miles down to the famed Titanic wreck site. A once in a lifetime adventure that only 108 people in the world have been to!

This DVD has never before seen footage and interviews with Scientists, explorers and photographers who were there when The Titanic wreckage was first discovered.

Plus when you buy this DVD you also get: –
– An additional 20 minute bonus video
– Stills from Fran’s world record journey.
– An autograph by Fran Capo & CD’s personally autographed.
– A copy of the certificate of authenticity stating that Fran was down by the wreck site.
– Footage of Fran’s actual sponsored world record book signing and memorial prayer which are listed in both “Ripley’s Believe it or Not” and “The Diving Almanac and Yearbook.”

This is a great unique DVD for Titanic lovers. Normally the package goes for $34.99
But this Titanic anniversary week ONLY special is from April 8 to April 15th, 2012 is going for an incredible (Yes I used that word…incredible) $9.99 plus shipping and handling. Allow 3 weeks for delivery. Click here to order