Fran Capo holds 9 world records but she is most known as the World’s fastest talking woman. She’s appeared in the Guinness Book of World Records, Ripley’s Believe it or Not – Planet Eccentric book and in The Book of Alternative Records. 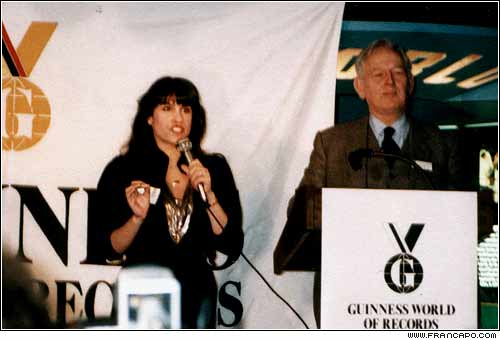 Fran at the Guinness museum in New York City. She is seen here with the Co-founder Norris McWhirter, demonstrating her record for the press.

Dubbed “Fast Talker Extraordinaire” by the Associated Press, comedienne Fran Capo doesn’t mind if you call her motor mouth. In fact, she’s proud of it! Fran Capo is The Guinness Book of World Records fastest talking woman clocked at 603.32 words in 54.2 seconds. That’s 11 words a second!

The story of how she broke her record has appeared in countless articles world wide and in Ripley’s Believe it or Not – 2006 Planet Eccentric book (on page 109), Chicken Soup for the Woman’s Soul on page 82 and in the “The Book of Wisdom” page 414-415 (Not that she has this memorized!)

A native New Yorker, Fran was always a fast talker, but she never planned on breaking the record…and no she didn’t come from a large family where she had to fight over the food. She does however have one sister, who speaks three languages slow. So naturally Fran figured why not speak one fast to make up for the difference.

HOW YOU CAN USE FRAN’S FAST TALKING SKILLS:

-Corporations big and small have used Fran’s talents to spark up their live, video and on-line presentations.

-Schools have used her fast talking abilities and motivation to inspire kids through her “World Record Mindsets” in classrooms and for graduations.

-Spokesperson for products live, and with PR campaigns.

-Celebrities have been pranked on TV and radio by her fast talking skills.

-Commercials have used her as a spokesperson for their products that accentuate speed, efficiency and accuracy all done in a funny memorable way.

Join the group of successful companies that have used Fran’s talents for an unforgettable commercial or performance.

Click Here For a phone consult or a booking

Here are just 2 examples of how companies have used Fran’s Fast Talking skills:

For JOURNALISTS & OTHER MEDIA:

Below is the printed version of the fast talking story

I’m a stand-up comic by profession. Several years ago, I was working at a radio station WBLS-FM in New York, doing the weather and traffic as this character June East (Mae West’s long-lost sister).

One day, Dinah Prince from the Daily News called and said she wanted to do an article on me. When she had finished interviewing me for the article, she asked, “What are you planning to do next?’ Next? Well at the time there was nothing I was planning on doing next, so I asked her what she meant, stalling for time. She said she really wanted to follow my career. Here was a woman from The Daily News telling me she was interested in me! So I thought I’d better tell her something.

What came out was, “I’m thinking about breaking the Guinness Book of World Records for the Fastest Talking Female.” The newspaper article came out the next day, and she included my parting remarks about trying to break the world’s Fastest-Talking Female record. At about 5:00 P.M. that afternoon, I got a call from CNN asking me to go on the Larry King Live Show. They wanted me to try to break the record. They told me they would send a limo to pick me up at 8:00. That was only three hours. They insisted because they wanted me to do it that same night! Talk about pressure.

I told her I had to find a replacement for my 7:00 p.m. show. I started calling every comic I knew. By the grace of God, I finally found one who would fill in for me. With five minutes before the deadline, I told the producer of the Larry King Live Show I could make it. Then I sat down to figure out what on earth I was going to do on the show. I called Guinness to find out what the rules were to break a fast-talking record. They told me I would have to recite something from either Shakespeare or the Bible. Since Shakespeare and I never really got along, I figured my best bet was the Bible. I started reciting the ninety-first Psalm, a prayer for protection that my mom had taught me. I began practicing, over and over again; timing myself with a stopwatch to see how fast I could do it. As my speed increased, a rush of emotions came over me. I think I can do this! I was both nervous and excited at the same time.

At 8:00 p.m. the limousine picked me up. I practiced the whole way there, and by the time I reached the New York studio I felt as if my tongue was going to fall off. Just in case, I asked the producer, “What if I don’t break the record?’ She smiled and said, “Larry doesn’t care if you break it or not. He just cares that you try it on his show first.” So I asked myself, “Okay, Capo. What’s the worst thing that can happen? I’ll look like a fool on national television! I could live through that. Then I asked, “And what’s the best that can happen?” I break a world record! Now that would be great. So I gave it my best shot, and…

I broke the record, becoming the World’s Fastest Talking Woman by speaking 585 words in one minute in front of a national television audience. (I broke it again two years later, with 603 words in 54.2 seconds) My career took off.

People often ask me how I did that or how I’ve managed to do many of the things I’ve done in life, like lecturing for the first time, or going on stage or bungee jumping. I tell them I live my life by this simple philosophy: I always say yes first, then ask myself, ” Now, what do I have to do to accomplish that?” If I get the slightest bit nervous I think, “What is the worst thing that can happen if I don’t succeed? The answer is simply, I don’t succeed! And what’s the best thing that can happen? I succeed. What more can life ask of you? Be yourself, and have a good time! And never be afraid to “Just Say Yes!”

FRAN FAST TALKING THROUGH THE YEARS:

(All Photos on this page are copy written but you can get permission by Fran Capo to use it.) 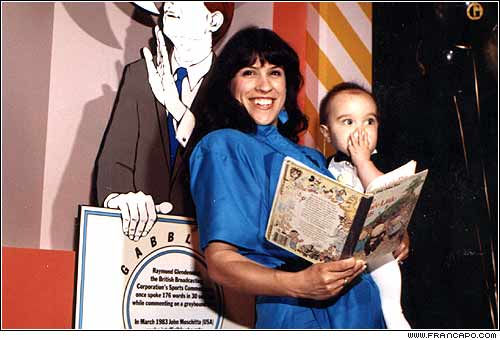 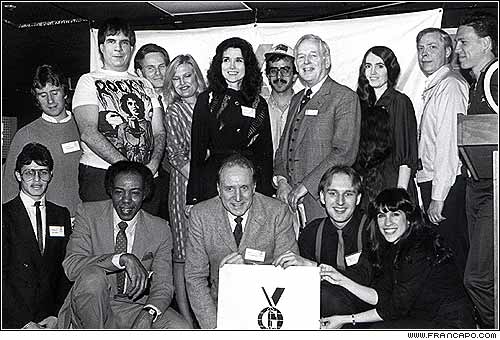 Group shot of Guinness holders at NYC museum. Also in the photo is the Woman with the longest hair, and the Worlds Smartest Woman. 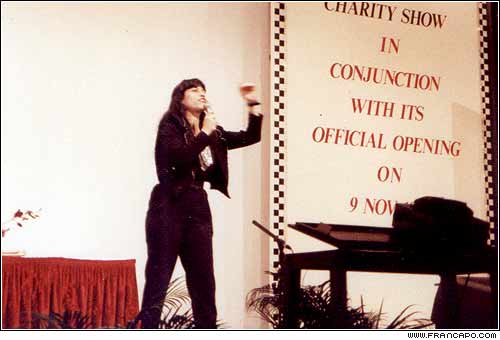 Fran on stage in Singapore at the opening of that museum. In this shot she is demonstrating her skills for the dignitaries of that nation, plus a very special group of kids – a funny story she tells in her lectures. 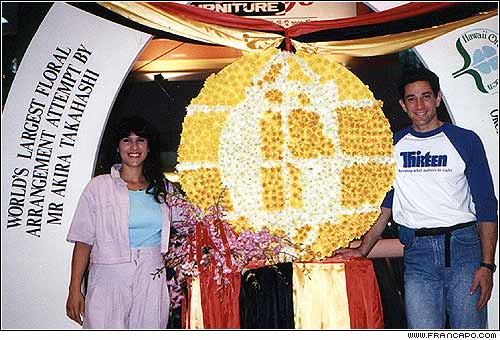 Fran and fellow record holder Ashrita Furman at the Singapore museum. Furman is the world’s most versatile man…he holds over 100 world records and holds the record for holding the most records. 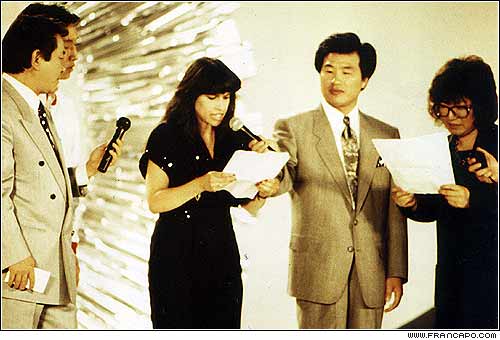 Fran being put to the test by Korean officials at the Guinness Exhibition in Seoul. Good thing there was a translator nearby. 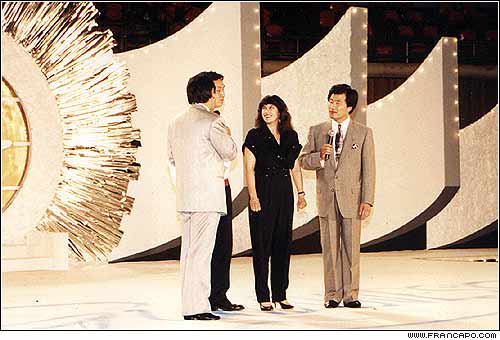 Fran talking about her career to the Korean audience of over 2000. 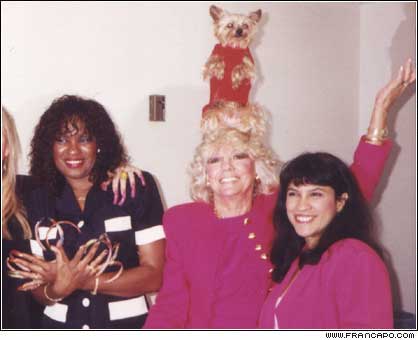 Backstage on the Sally Jessie Show with fellow record holders, the woman with the dog that does the most tricks, and the chick with the longest nails.

On the set of the TV show “AM Buffalo” with the worlds tallest Woman, Sandy Allen. Yeah, don’t we just look like two normal chicks sitting around and talking! 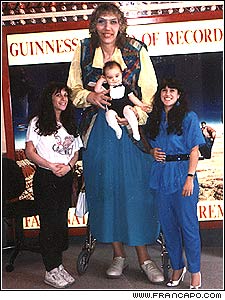 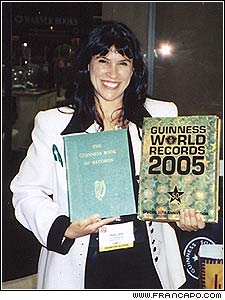 Fran holding a copy of the very first Guinness Book published back in 1955, right next to the 50 year anniversary addition of the 2005 book. We’ve come a long way baby! 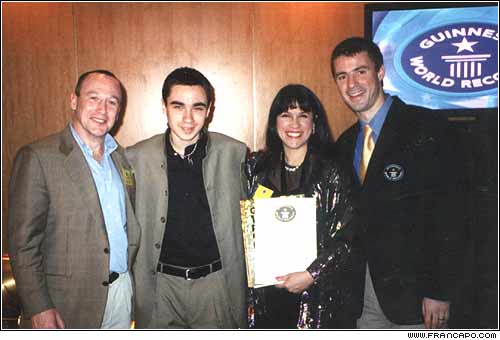 Fran was invited to speak at the celebration of the 50th anniversary of the Guinness Book. She was given a 50th anniversary certificate. She poses here left to right with: Aliston (the CEO of Guinness, her son, Spencer, herself, and Stuart Claxton (researcher and organizer of events).

What Can I Do for You?

FOR A PHONE CONSULTATION OR TO BOOK FRAN NOW