THE MANY WAYS TO USE FRAN’S COMEDY EXPERTISE:

Whether you want Fran as a straight stand up comic, fundraising event, to do a tailored imposter routine to break up dull boring seminars, to just produce an event or teach you how to add humor to your speeches –  she the fast talking comedic girl for you!

COMEDIENNE: Fran Capo is a comedy veteran, tailoring her stand up comedy performance for every type of audience around the world from Nuns to Hells Angels, from politicians to preachers, from corporate CEO’s to secretary luncheons to Girl Scouts to Chamber of Commerce’s,..you get the gist. (She’s been around!) Major comedy clubs like; Caroline’s, Dangerfield’s, Comedy Cabaret, Mohegan Sun, Tropicana in Vegas, and the Gran Ole Opray in Nashville and every branch of the military from Long Island, NY to Okinawa to The DMZ Zone in South Korea have utilized Fran’s talents. 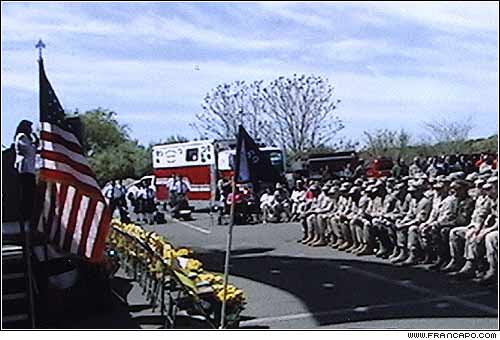 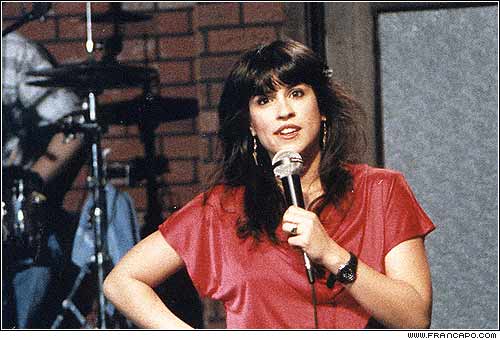 FUNDRAISING: Looking to spark up your charity or fundraising  event? Fran has performed regularly for Comedy Cures and partnered with JTC on the Move. She’s also engaged the audiences of Make a Wish Foundation, Firehouse 9-11 fundraisers, St. Jude Foundation, Knights of Columbus, Earth Island Institute, PETA, World Vision and many more. 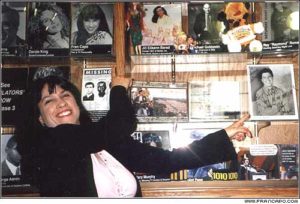 FEELING NOSTALGIC? Fran’s novelty rap record, “Rappin Mae” was written up in Billboard Magazine and played on Kiss FM and WBLS in their regular rotation. Posing as a sultry June East, (Mae West’s long lost sister) Fran toured the country with LL Cool J and the Fat Boys, and performed at the Liza Minelli/Frank Sinatra High Roller Party in Atlantic City. If you want her to come dressed as “Mae” for a wedding or event, she’ll be all decked out. 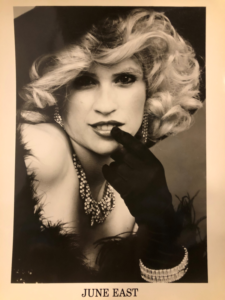 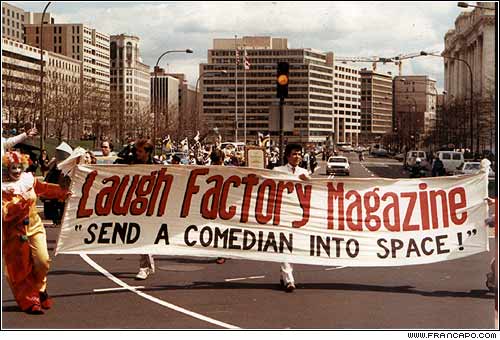 IMPOSTER ROUTINE & COMMERCIAL CHARACTERS: Corporate & television impostor routines are one of Fran’s favorites where she gets to prank the audience combining her stand up comedy and fast talking skills.  She poses as an expert, goes off into numerous rapid fire funny tangents and then abruptly ends looking at a bewildered audience – only to have  the TV host or MC reveal to the shocked audience who she really is. . It receives thunderous applause and breaks up the speaking day for attendees Her character bits for clients on TV have ranged from playing a judge to the worlds oldest banking customer. Some past clients include Pfzier, Dr. Oz, Martha Stewart, The Doctors and Susan Lucci, Nissan, Pitney Bowes, Pudgies Chicken, GE Captial, Flexon, 1-800-FLoers, Perdue Short Cut Entrees, Snickers Marathon Energy Bars, Auntie Anne’s Pretzels & Chock Full of Nuts.

PRODUCING COMEDY EVENTS: Fran also produces double headliner comedy shows for venues looking to bring in extra income, and major media productions as well.  Some past media events that garnered huge success were, Comedy Day in NYC (Dec. 12th);  As head writer of “Laugh Factory Magazine” organizing a parade down Pennsylvania Ave in D.C. to “Put a Comedian in Space” and asking for a 2 drink minimum on the moon, creating “Stand-Up for Animals” in NYC to raise money against animal abuse and testing as well as comedy for long time running venues like SUDS & The Comedy House in NYC, Piazza Roma in Cortlandt Manor, Roccos in Ct, and Taorominas in Peekskill.

TEACHING COMEDY Fran’s teaches “Creativity in Marketing” and “The Humor Approach” to corporations based on her books. She has also taught to the general public at the Learning Annex, Queensboro College, Queens College and The Seminar Center, and does one-on one consultation on how to add humor into all kinds of speeches from Business to classroom to wedding toasts. 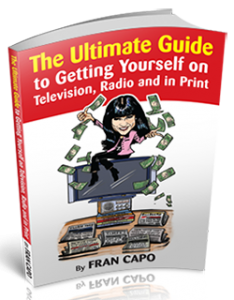 “The Ultimate Guide to Getting yourself on Television, Radio and in Print”  and “The Humor Approach, putting your funny side up.” 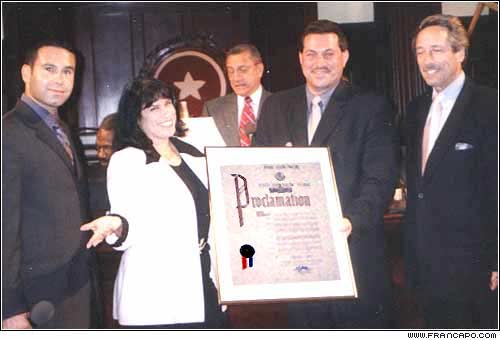 Fran being honored in City Hall by Councilman Joseph Addabbo with a Proclamation from New York City, claiming her as an inspiration to all and a true Renaissance woman. 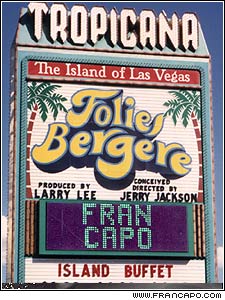 Fran’s name up in lights in Vegas, when she performed her week long show at the Tropicana. 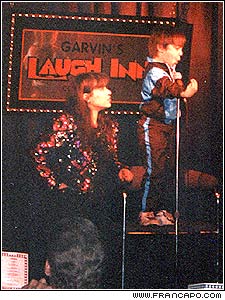 Caption: Fran has been doing comedy for 20 years. Her son, Spencer started with her when she was at the Trop in Vegas. Here’s them on the road, performing at Garvins in Washington, DC. 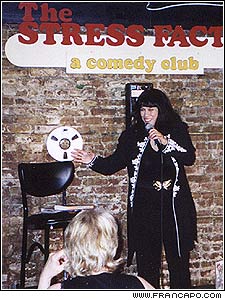 Caption: Fran was asked to host the Comedy Central event, “Women helping Women” at the Stress Factory in New Jersey. The money went to abused women. 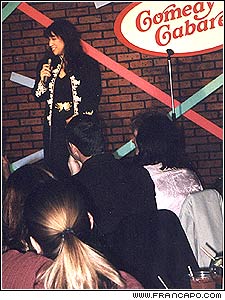 Caption: Fran has been a regular at the Comedy Cabaret for over 20 years. This night she was shooting some footage for her reality show, “Life in the Fast Lane.” 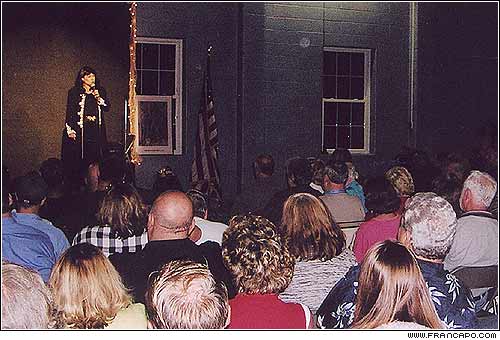 Caption: Fran performs to a sold out house on September 11th, for a comedy fundraiser for the fireman in Mattituck, Long Island. 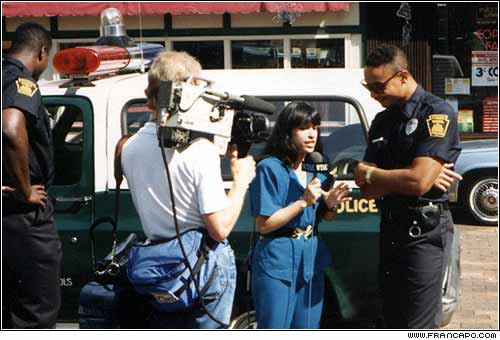 Fran was asked by a local station to play a prank on a cop on tv by fast talking him with her comedy asking for bogus directions. 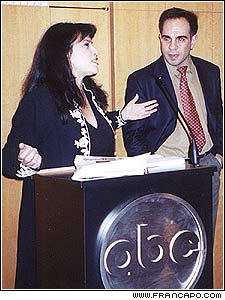 Caption: Even media audiences like to laugh. Fran was asked to do some comedy for ABC during their unveiling of Buck Wolf’s new book. 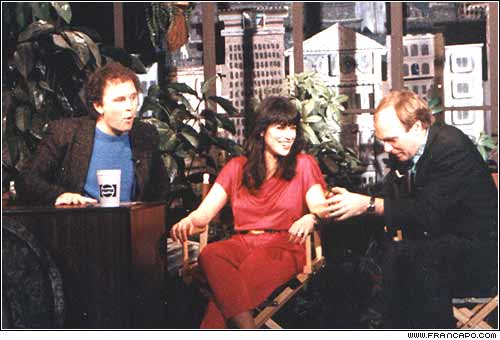 Often on TV shows after you do your comedy routine you get to sit down and joke with the hosts. Here Fran is listening to one guy comment on her recent adventures. 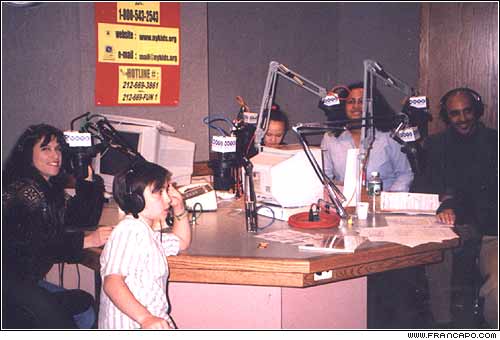 Fran and her son Spencer, who also does stand up go on the radio show New York Kids and tell jokes.

Over the years Fran has met and worked with some pretty famous people, either doing live shows with them, or being a guest on their shows…see if you can recognize them. 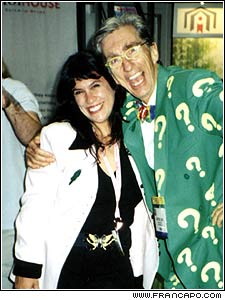 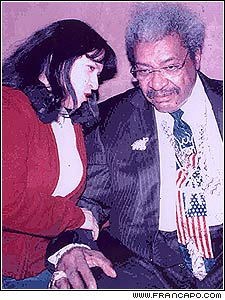 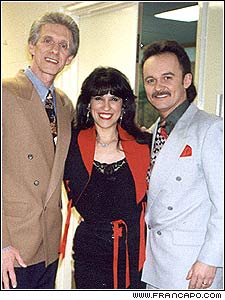 Fran and the Statler brothers 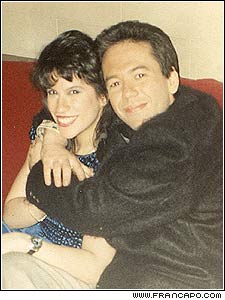 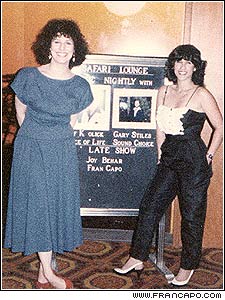 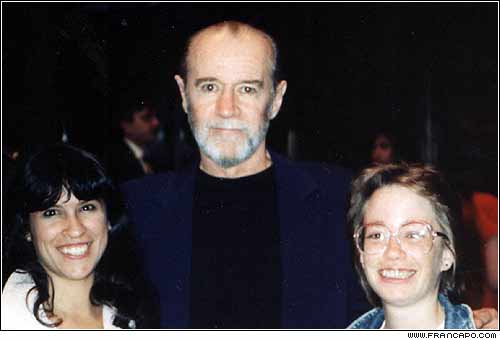 Her fast-talking, boundless energy, down to earth approach makes her easy to relate to and a fun quick witted TV guest. She has appeared on over 250 TV shows including; Good Morning America, Larry King Live, Last Call with Carson Daly , Inside Edition, ET, Ripley’s Believe it or Not, More than Human and Nick at Nite’s – Hi Jinx. She’s been heard on over 1000 radio shows including Howard Stern. On the corporate front, Capo is sought after not only as a motivational speaker and spokesperson but also as a featured author. Her topics include: How to Get Publicity without a Publicist, How to Break into Voiceovers, Dare to Do It, Humor and Business Speaking and Creativity in Marketing.

As an actress and voiceover talent Fran has appeared in several movies and cartoons including Lonely in America, with Spike Lee and in the Sundance Film Festival winner, Sunday. Fran appears in “Signs of the Cross” which won both the 2005 Pocono film festival and the Long Island film festival for best picture.