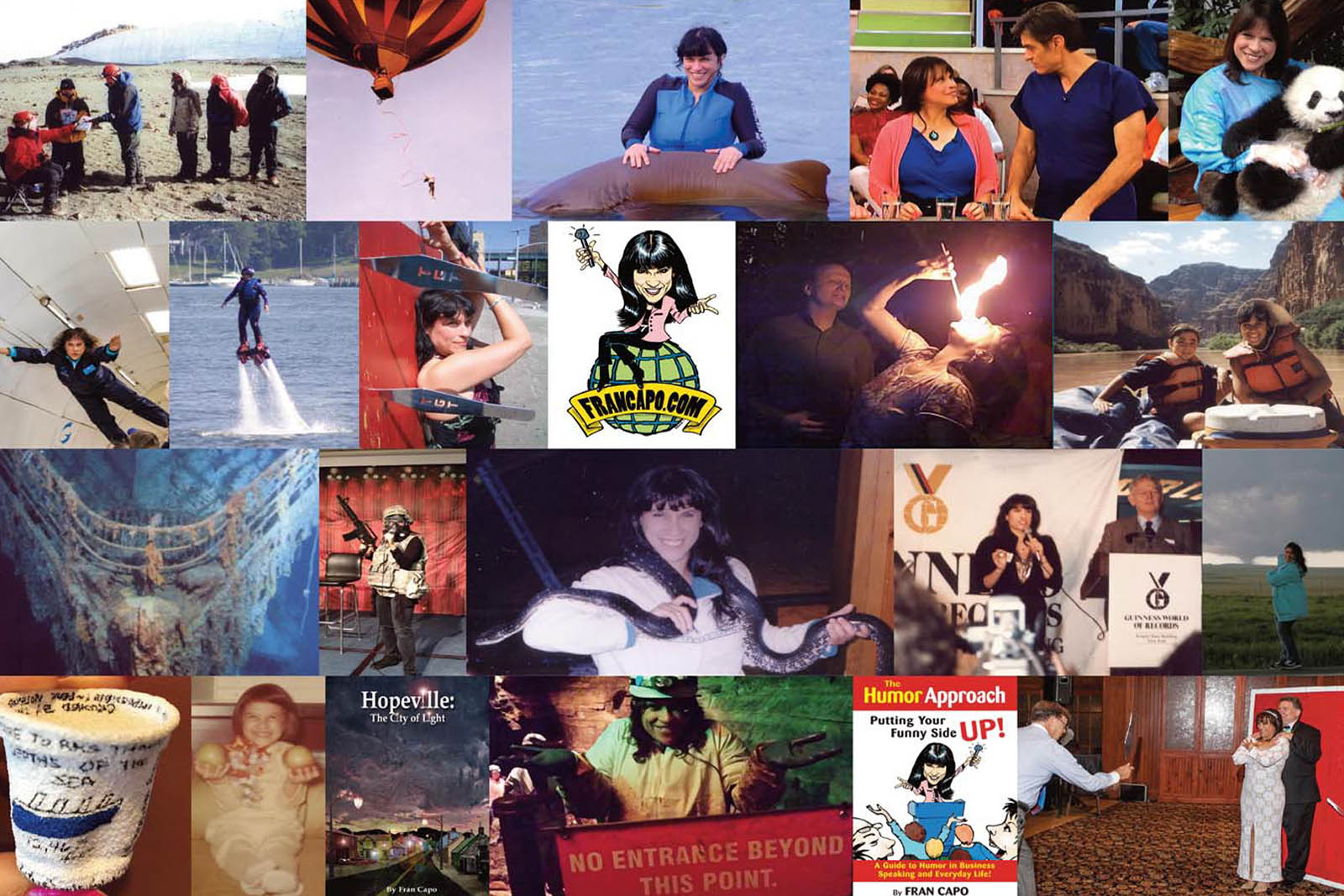 HOW DO YOU OVERCOME FEAR AT EVERY TURN?

Explore and push your limits so you can grow, grow, GROW!

“Never be afraid to try something new. Remember that amateurs built the Ark. Professionals built the Titanic.” Author Unknown

Fran Capo has been doing adventures since the tender age of two! As an adventurer Fran has bungee jumped, swam with sharks, flown combat aircraft, driven race cars, crawled in a polar bear den, slept in an ice hotel, climbed Kilimanjaro, dove to the wreck site of the Titanic and ziplined inside an active volcano.

She has written hundreds of articles on her adventures, journals them in her blogs, talks about them in her Cuppa Capo lives, reports on them as the adventure correspondent for CBS “Live it Up” Tv show and has authored the book “Adrenaline Adventures: Dream it, Read it, Do it!” which not only chronicles 50 of her adventures, but tells the reader where they can go out an do it themselves.

What drives this woman who has been compared to a modern day Nellie Bly to do these things? We thought it best to let her describe it in her own words by letting you read an excerpt from  foreword of her book. The bottom line is you never know where this girl will show up.

Foreword of book: “Never be afraid to try something new. Remember that amateurs built the Ark. Professionals built the Titanic.” Author Unknown

When I was a kid, my mom, Rose, gave me three pieces of philosophy to live by:
1) Have a positive attitude.
2) Nothing’s impossible.
3) Try new things.

My dad, Frank, (Or Frankie Crooks to those of you who read Almost a Wise Guy) added his two cents by teaching me to laugh at things and not to take life so seriously. So between the two of them, I would try something new, and if it didn’t work, I’d learn to laugh at it later. I don’t think either of them realized what a comedic daredevil they were creating.

My parents didn’t just casually hand out these philosophies. They had me live them. My dad, as you will read in the motorcycle chapter, had me riding on the front of his motorcycle at the tender age of two, and he would take me down to the Hudson River to throw rock in. (Trust me, they were rocks, nothing else.)

At the age of four we were shooting fireworks off the roof of our Greenwich Village apartment. (Hey, I was a kid. I didn’t know it was illegal. I just knew it was fun, and if we saw a cop, I was told to keep quiet.)

We moved to Jamaica, Queens, when I was five, and my mom had a field day. We lived behind Goose Pond Park. So, naturally, I was climbing trees and hoping fences, and my mom didn’t seem to mind. Some of her friends said that I was a tomboy. My mom told them to mind their own business, that I was just being a healthy kid.

As was my mom’s philosophy, she thought the best way to know what you wanted in life was to try a bit of everything, and then you could decide with an first hand knowledge what you liked or didn’t like. .

So my mom introduced me to karate (where my sister and I were the only girls allowed to spar with the boys, while my dad placed bets on us); ballet (where I was not a pillar of grace but at least I saw what I looked like in a tutu); transcendental yoga (where I wanted to trade in my mantra for a newer one); and the Ouija board (where my mom tried to bless the board with holy water after The Exorcist came out). My mom gave me a sense of wonder and a desire to explore the world.

It was at the age of twelve, though, that I really started to get creative. I remember coming home from the circus one day and convincing my sister, Sharon, to sit on my shoulders as I rode my bike in circles in front of our house. I don’t know who was braver her or me! All I remember is my mom looking out the window and yelling, “Watch out for the cars!” My dad was probably off somewhere placing bets on how long it would take us to fall.

The adrenaline bug could hit me at any time, and any little thing could spark my interest to try something. Watching a Bob Hope movie in which he was fencing made me join the high school fencing team. Watching The Wizard of Oz made me try hot air ballooning, and reading a phone bill made me try the luge. (You are going to have to read that chapter to understand that last one.)

In college I upped the ante when I went skydiving with my friend Sheldon. I think at that point my mom started to worry a bit, but instead of telling me to not try the adventures, she just insisted on coming along, saying a prayer, and being the camera person with the hopes that if had it on film I wouldn’t have the desire to do it again.

As I got older, my one adventurous female friend, Vivian Kalman, who introduced me to the world of scuba diving and was always ready to hop a park fence, moved away. So I decided to unleash my thrill seeking passions on the unsuspecting men in the dating world. Before long, I’d made a spirit of adventure and competitiveness, along with a good sense of humor, an absolute requirement in my men.

I married two men, and I think I wore them out. The third one, Steve, I’m still with after 20 years but I think that’s because he doesn’t do every adventure with me, but has no problem me running off with a friend to do it…in fact he prefers it. I have a very high energy for life, and I tend to be (okay, I’m really) competitive, but always with a playful spirit.

To me, whether it’s a casual date or a lifetime mate, you really learn a lot about the other person and bond with them (or at least test the strength of the glue) when you take on a challenge together. You’re bound to look at each other a whole lot differently when you see them handling a ten-foot shark in water rather than a one-foot loaf of bread in a supermarket.

The way I see it, boredom breeds contempt. Playful competition and a spirit to try new things keeps the romance alive. You’re more likely to get into an argument going to Home Depot for the millionth time than if you’re bungee jumping with them, and your energies are concentrating on not hitting the ground at one hundred miles per hour, so the local police don’t have to draw a chalk line.

Some say I have a death wish, but they’re wrong. I have a LIFE wish! I don’t want life to pass me by. And it’s not just boyfriends and ex-husbands who are victims of my life wish.

My son, Spencer is often the happy participant in many of these adventures too. He has already gone dog sledding, surfing, soaring, spelunking, diving, swimming with dolphins and manatees, and the list goes on … you should see his scrapbook.

In fact, he has done so many adventures that I have often had teachers of his call the house and tell me my son has a very vivid imagination.

When I ask about what, they say, “Oh, he said you were crawling around on your stomach with hundreds of bats in a cave, and he also said he felt moss on the back of a manatee.”

When I tell them this is true, they are usually speechless. Then they say, “Ms Capo, you do realize this is not the typical stuff a child is introduced to.”

“Yeah, well, all I can say is who wants a typical life! And I don’t plan to stop soon either….  (Sorry ending it here…to read more check out my book “Adrenaline Adventures” in the book store…You will get amazing ideas of things to explore in the world.

Adrenaline Adventures covers the really cool extreme sports and adventures that you don’t have to train for three months, don’t have to be an expert at, and don’t have to spend a million bucks on the equipment? Where are the adventures you can try once, feel the thrill, and then move on to the next adrenaline rush?”

Some are really exciting, some are expensive, some are cheap, and all are told with humor.

Exploring life with passion and enthusiasm and share the thrills with mates, family, and friends has great payoffs. You build your self-esteem and find a renewed vigor for life. Your kids think you’re pretty cool (even if the teachers think you’re crazy).

You can get a good back rub from your mate (that is, if you’re both not too exhausted), and you’ll stay in shape. Life becomes exciting and filled with great memories. After all, you don’t want your biggest claim to adventure to be the day you had a tooth pulled without Novocain.

My mom and dad had mottoes, and now I will tell you mine. “Fear Nothing— And if you do, do it anyway!” Challenge your mind, your body, and your spirit. God gave us this life. I hope when I finally meet Him, I can proudly tell him I used up everything he gave me.

Get out there, enjoy, and create a life of adrenaline adventures!

And don’t forget to take pictures!

Feel free to contact me if you want to sponsor me for a crazy adventure for you or your company. 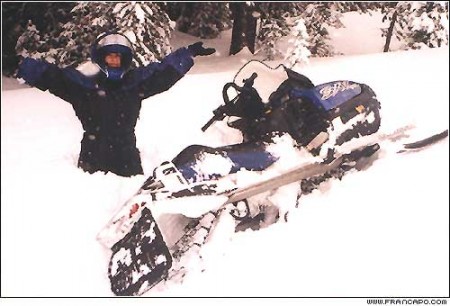